After getting through a version of the ubiquitous R text-mining tutorial, I wondered if I could kick the whole thing off, programmatically, from nodejs. I could. This is how:

A botched attempt with 'r-script' package.

The outdated r-script wasn't working for me. I started doing something I'd never done before: editing an npm package inline, right inside the node_modules folder. Gasp!! I tried:

... and then when I got the point where I was questioning its dependence on the needs package, I realised wtf this thing is actually a tad overwrought for my needs. I literally just need to invoke R, and node has child processes out the box. So:

This is all I needed, in the end:

Yep. That's all. No need for reliance on other packages. I just had to find where the R executable lived, on my machine. Turns out it's called rscript.exe (I'm on windows). Rstudio had long abstracted me from this fact. :)

The --vanilla flag, as I understand it, basically causes rscript to give you a brand new, clean, r session with nothing loaded... this is the safest option for reproducibility in any environment. The --args flag basically tells R to only pass the commandline switches appearing after it, into your r script as arguments. So in the actual R script, I have this:


How do the two codebases live side by side, and which editor is dominant?

Well, so far I've resisted the urge to do my r editing in vscode. All the js is edited in vscode, and believe it or not, all the R is edited in RStudio, which is free and already installed on my machine. RStudio is best for editing and playing with R scripts, so I figure, let it do its job.

One key to peaceful co-existence is atually the /data folder, which has inputs, staging and output folders. It is infinitely easier to use the filesystem for data handshakes than trying to squirrel json between 2 processes like the r-script package was trying to do. Infinitely more debug-able and scale-able too, far's I'm concerned.

Another key thing is that the R-script must be prepared to install libraries that don't already exist in the environment, instead of barfing and shuddering to a halt. This is the workaround I'm using (I found it online, tried it, and it works):

The last piece of the puzzle is git. When it comes to interfacing with git, I let vscode run the show because I prefer its git interface. To be fair, Rstudio is git-aware too and you can also access your commandline from RStudio.. I just felt happier doing this from vscode. 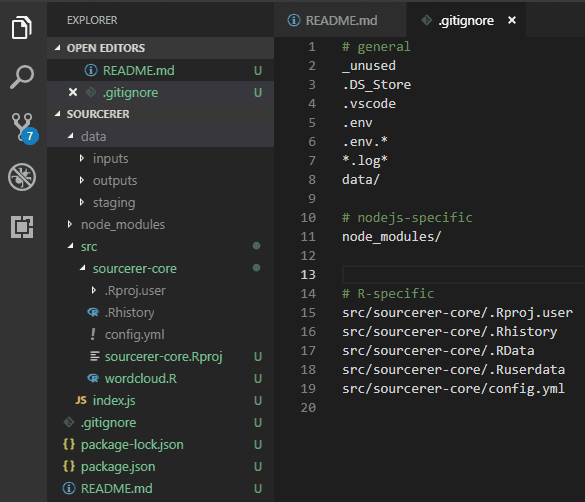 The core R project can load all by itself in RStudio, regardless of the surrounding project. I basically just tucked it away one folder down inside the source tree. I may evolve how I do this going forward: this was a first stab.

I followed this AWESOME tutorial. If you're new to R, you will love it. For my corpus I just dug up the Act of Canada. I used the tutorial to mine tokens and clean the text data to build the wordcloud. Some things I learned along the way:

You can play with the codebase if you like.